Trials of the Ford Transit Custom Hybrid have been confirmed.

This multi-million-pound Ford Transit Custom Hybrid Project from Ford has been designed with the aim to help improve air quality in London.

The 12-month trial begins in London in December 2017, and is supported by Transport for London.

Twenty Plug-in Hybrid Transit Customs will be trialled across London. The first five fleets have been confirmed as:

The Metropolitan Police will trial two of the Transit Custom PHEV vans.  The first will be marked and used as a second response vehicle to traffic accidents and the other will be un-marked and used as a forensic support unit. The PHEV vans are fitted with range extenders, this means that they are capable of longer journeys and essentially, the emergency services will not be limited by their battery mileage range.

Transport for London will also be taking advantage of the range extenders and will be using three PHEV vans for freight services. This will dramatically reduce local emissions by running wholly on electric power for the bulk of inner-city journeys.

The trialling fleets have been selected to gather data from a diverse cross-section of businesses in the City.

The trial Ford Transit Custom PHEV Vehicles will use a telematics system which will provide data on the vehicle statistics. It will monitor their day-to-day usage and provide information on the vehicles’ financial, operational and environmental performance.

Results from these trials will be used to maximise the benefits of this kind of PHEV Vehicles.

When can expect to see the Transit Custom PHEV available to buy?

Ford plans to release the Transit Custom PHEV to the commercial market in 2019.

The Ford Transit Custom hybrid has a ‘range-extender’ with an electric motor powered by the combination of a lithium-ion battery pack and a tiny 3 cylinder turbo, 1.0 litre EcoBoost petrol engine.

The range extender means that the electric motor always provides power to the wheels, the petrol engine acts as a generator for additional electricity required when the battery has been drained.

Will the Transit Custom PHEV still be practical?

Ford has eliminated the issue of heavy batteries by reducing the number required with the assistance of the small petrol engine.

With this in mind, it is understood that the PHEV will still have a one-tonne payload when it hits the market in 2019. As the battery pack is installed under the floor, the load volume will not be affected.

Advantages of a Plug-in Hybrid Van

The PHEV battery can be pre-charged using mains electricity before your journey. It makes sense to charge the vehicle overnight. The battery within the Transit Custom can offer up to 31 miles of completely emission-free driving.

The PHEV takes away the worry of running out of range that you would have if you were driving an all-electric vehicle. Once the battery is low, you switch to petrol power and then refuel at any petrol station along your route.

Will the Transit Custom Hybrid be suitable to travel into zero-emissions zones?

Using the battery power as much as possible will obviously dramatically reduce the running costs and efficiency. With the ability to switch between battery and petrol power, you can choose to save some of your battery power for the parts of your journey within the ‘low emissions’ zones. Simply switch to battery power on entering these areas.

Will I be restricted in mileage range of the Transit Custom PHEV? 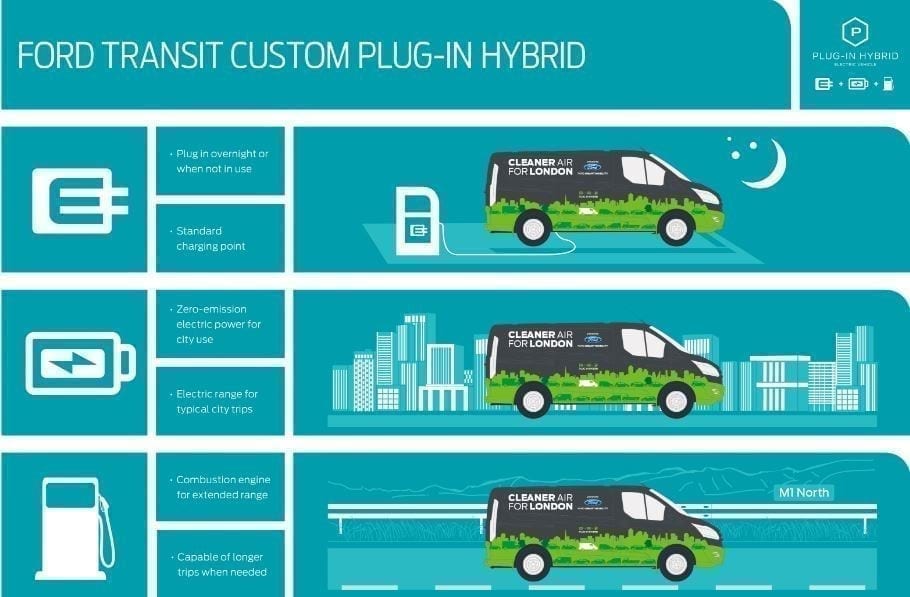 On top of the 31 miles of completely emission-free driving, the extra electricity generated by the Ecoboost petrol engine will mean that the Transit Custom hybrid has a maximum combined range of approximately 355 miles! That’s pretty impressive!

The Transit Custom PHEV (Plug-in Hybrid Electric Vehicle) is the first of Ford’s long-term plan to release 13 new electric vehicles over the next five years.