The ever popular Volkswagen Transporter is our top selling van and for good reason.  Volkswagen’s winning formula for this van has evolved over the years and it’s  more popular than ever. The first three generations were called Type 2 but were retroactively named T1, T2 and T3. Now on its fifth generation, the sixth generation T6 is speculated to debut sometime in 2015 or 2016.

Short History of the VW Transporter

The Volkswagen (People’s Car) Company was conceptualized in the mid 1930s to realize Adolf Hitler’s dream car for the common German. The Volkswagen Type 1 or VW Beetle or VW Bug, was designed by Ferdinand Porsche and came into production and mass produced after WWII.

Ben Pon, a Dutch importer, had a brilliant idea when he chanced upon a modified VW Type 1 being used to transport cargo. He sketched his “idea” and this sketch marked the beginning of the very popular Volkswagen Transporter. Retailers, tradesmen and businesses needed such vehicle. The VW Type 2 filled a need of a booming economy after WW II.

VW T2 – The VW Transporter T2 was manufactured from 1967-1979 in Germany. It was in production in Mexico until 1994. The line was by then known collectively as the Kombi, Microbus or Transporter. The T2 models were classified as either T2a (models before 1971) and T2b (after 1972). The Brazilian production of the VW T2 finally ended in 2013.

VW T3 – The VW Transporter T3, also known as T25, is the third generation Transporter and the last of the rear-engined VWs. It was more box-type and larger than the T2 and was called a Vanagon or Caravelle. It was produced in Germany from 1979 to 1990.

VW T4 – The Volkswagen T4 was in production from 1990 -2003. Called the VW Eurovan in North America, the VW T4 is the first Transporter to be fitted with a front-mounted water-cooled engine. The T4 was fitted with either a petrol or diesel engine and available as a kombi van, panel van, multivan, Westfalia, and a Doka (single or double cab pick-up style platform). Wheelbases were either short (115 inches) or long (131 inches). Roof heights were variable too. The short nose version is called the T4a while the long nose version is the T4b.

The VW T4 has gained quite a following due to its usability. It’s a highly popular base for small to medium-sized day and camper vans. The Westfalia-Werke was manufactured by VW to answer the need for a campervan. However, most T4 campervans were aftermarket conversions. Such is the popularity of VW T4 that enthusiasts in the UK and other parts of Europe hold forums and meetings regularly.

The VW T5 is the fifth generation and current VW Transporter that replaced the T4 (1990-2003). Also called the Caravell or Multivan, the T5 was launched in 2002 and introduced to the public in 2003 by Volkswagen Commercial Vehicles (VWVC). The VW T5 is available as a people carrier and a light, medium-sized commercial van fitted with either a diesel or petrol engine, and a choice of 4-wheel drive (4motion) or front wheel drive. This edition is deemed as a dependable commercial workhorse.

It has been noted that there are well over 100 possible combinations for a T5. Variants are LWB (long wheel base), SWB (short wheel base), and low to high rooflines. The T5 can be configured as a minibus, panel van, half panel van, Kombi, single and double cab pick-up, chassis truck or drop side, and a range of custom-built models.

The T5 is used as taxis, police cars, ambulances, fire emergency service vehicles. As with the T4, the VW Transporter T5 is also very popular due to its versatility. Conversion companies have turned T5s into food trucks, refrigerated vehicles, campers, disability vehicles with wheel chair ramps, ladder trucks and more.

The VW Transporter T5 remains a favorite and has received numerous Van of the Year awards from various groups in the UK, Australia and Europe. It is speculated that the new VW T6 is slated to come out sometime in 2015.

Today, the VW Transporter T5 is one of  Swiss Vans’  top selling vehicle. We have a long list of options for you to choose from. 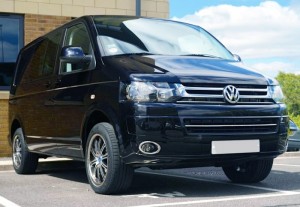 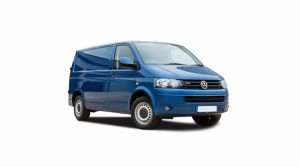 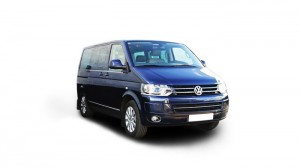 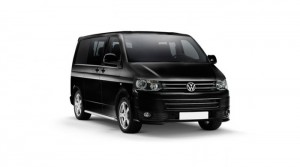