Rumours have been going around regarding the launching of replacement for the 11-year old VW T5 platform since 2013. The internet rumour-mill speculates that the new VW 6th generation Transporter will be out in the market in May 2015.

In 2014, VW launched the 2015 Tristar Concept Vehicle – a highly innovative 4-wheel drive concept packed with new designs and technology including an in-cab video and audio systems. The same year, VW T6 e-Co-Motion concept van was released. Between these two concepts brewed the idea that the soon-to-be-released VW T6 will be similar in design and styling of the Tristar and e-Co-Motion concepts.

Volkswagen is noted in gradually introducing new design styles, specifications and engines in their product lines. It is likely that the Volkswagen Transporter T6 will be mostly based on the T5 platform, with minor exterior changes such as a shortened bonnet and new front/rear lights. VW Transporter enthusiasts are banking on a new line-up of engines for more power and efficiency.

Will the VW T6 be a worthy replacement of the iconic T5? The VW community has been assured by CEO of CWCV himself, Dr, Eckhart Scholz, that the new VW T6 will meet expectations. The designing team has been working hard in the past two years to produce a model that would live up to its name.

Just when will the much-awaited VW T6 debut in public?

The team from Swiss Vans does not like to second-guess anymore so come March 5-15, 2015, Swiss Vans will be at the 2015 Geneva Motor Show to find out for sure details on the T6 and possibly the latest van offerings from Citroen, Vauxhall and Ford!

Watch for updates that will be posted on Swiss Vans FB , Twitter and G+  accounts. 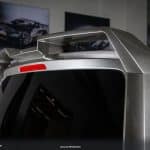 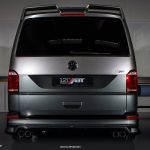 Rear ABT Skirt and Exhaust 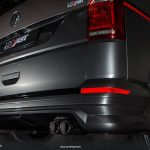 Complete with T6 ABT Exhaust 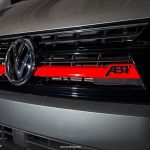