In a sad day for Volkswagen fans, the very last smiley-faced Volkswagen Transporter Type 2 Camper Van rolled off the lines in Brazil last month. The much loved ‘hippy-van’ was far more than a means of transport, it became the symbol of the sixties, the very embodiment of surfing and the classic icon of cool. Vito Van In fact, it spawned a whole generation of marketing opportunities. To this day giftware companies worldwide will testify that anything with a camper van on it sells… but when they say camper van, they mean a Volkswagen Transporter 2!

Volkswagen for their part are concerned to protect their brand, hence every item featuring the original Transporter has to be approved and licensed by them.  These may be only notepads, but Volkswagen had to approve the design and check every item conformed to exact dimensions of the original van.  UK manufacturer Elgate paid what is reputed to be £1 million for the license alone. 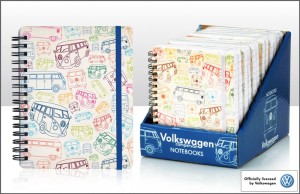 The Symbol of a Generation

After some success by individuals doing their own Volkwagen Transporter Ford Transit Camper Van Conversions, the Volkswagen camper van was added to the Transporter fleet in 1951.  It was later adopted in the 1960s as the symbol of peace, love and a different lifestyle, painted in a million different psychedelic designs. Later travellers adopted it as a classic surf van. They are even more desirable than when they were first produced and the end of production is only likely to add to their collectability. Famous owners include the likes of F1 champion Jenson Button, Actor Martin Clunes, The Who’s Pete Townshend and Celebrity Chef Jamie Oliver

Volkswagen Camper vans with the ‘splittie’ split front windscreen are particularly desirable and even have their own fan club, the ‘Split Screen Fan Club’. They fetch as much as £50,000 at auction – compared to the final ones rolling off the Brazilian lines for a mere £24,000!

The owners of these vintage Volkswagen camper vans are dedicated. They spend money hand over fist on keeping their vans in prime condition – but the are the first to admit their “Combis” stop badly, weigh a ton, are underpowered and prone to electrical failure. The faults just seem to make them love them more, affectionately nicknaming their vans ‘Dubs’. Legend even has it that Volkswagen Camper drivers acknowledge each other on the road with a special wave or sign – an open hand with the three middle fingers folded to the palm.

It is hard to see all of this affection coming to an end. You could be forgiven for thinking that the spirit of the old Volkswagen Camper ended when the last model rolled off the production line in Brazil. In fact, the shape may have changed but the Volkswagen Transporter spirit of freedom is alive and growing.

There are a whole generation of campers sourcing modern, ultra-reliable Volkswagen Transporter Camper Van Conversions (although the last T2 models from Brazil were UK bound and had such luxuries as MP3 sound systems!).

The freedom to go wherever you want is still an ideal held by many and the desire to travel is increasing. If anything, the modern generation is travelling further. Modern Volkwagen Transporter Camper Van Conversions are massive business. It may be a niche market, but Swiss Vans regularly supply new Volkswagen Transporters ready for conversion.

We regularly work with reputable converters who can make your van as unique as you. We can also help with funding the conversion via finance. As Swiss Vans supply so many Transporters for this purpose, our team know the ropes and it is a straightforward process.  Jamie Hook, Swiss Vans General Manager, said:

“When it comes to Volkwagen Transporter Camper Van Conversions, it is important to get it right so we only work with professional conversion companies, and we get the finance for the conversion included in the lease or contract hire price.”

“Using quality companies eliminates the insecurity, so they know with certainty that their Volkwagen Transporter Camper Van Conversions will do the job reliably for many years to come”

Volkswagen haven’t given up on their legacy of the camper van either. Those 60 years of Volkswagen history have been ploughed into their latest ultra modern Volkswagen Campers – The California SE and California Beach, ideal for those who don’t fancy waiting for their Volkwagen Transporter Camper Van Conversions.

These modern Volkswagen camper vans are proud of their rich heritage, which they have combined with modern engineering, reliability and a few home comforts for the home from home.

The spirit of wanderlust which the Volkswagen T2 Camper has epitomised is alive and kicking – and only a phone call away.