You might have the vision in your head that just one day out of nowhere, Volkswagen decided to start producing commercial vehicles and camper vans. That Volkswagen just decided to become one of the most reliable manufacturers. Well the true story is a lot simpler. In the beginning, Volkswagen vehicles were being produced at the Wolfsburg factory in 1947. At this time only Beetles were being made. Instead of having to carry heavy car parts through the factory every day, the workers at Wolfsburg cleverly adjusted the Beetle, stripping it down to use as a transformation vehicle. This is what sparked the idea for the the original Volkswagen Transporter. 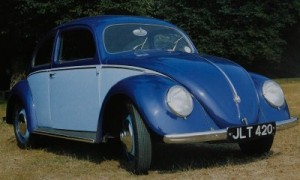 A car dealer from Holland, Ben Pon saw what the workers had done when he visited the factory. This inspired him to sketch a commercial vehicle which could then be adapted for multiple uses. Ben Pon’s sketch was admired by the general director of the Volkswagen factory. He gave the go-ahead for the production of Ben’s commercial vehicle. They called this the VW Type 2, which to us now is known as the original Volkswagen Transporter.

The original Transporter was one of the first vans to introduce forward control. It was about the same time as the Mercedes Vito tourer was invested. This is when the drivers seat is positioned above the front wheels. This started a trend in Europe.

Only two models of the Type 2 were offered back then: the Kombi and the Commercial Panel Van. In 1960, the Microbus was introduced, followed by the Deluxe Microbus the next year.A grand total of 9,541 Type 2 vehicles were produced in their first year of production.

Volkswagen introduced the Ambulance Model in late 1951. Camper van conversions became the icon of the hippie generation of the swinging 60s! The iconic, original Transporter was being manufactured in Brazil until 2013. The newer models are highly aerodynamic, efficient and reliable, and they’re still setting trends. The Volkswagen Transporter has won numerous awards. Its a long way from a Volkswagen Transporter T6 Sportline Lease

If you’re interested in a VW Transporter Highline lease, get in contact with us by calling us on 01656 837254. Or you could fill out our enquiry form. We’ll be more than happy to answer any questions you have and provide you with a quote. See terms and conditions