When it comes to the larger end of the light commercial vehicle market, there are a number of these beasts available.  The heavyweight of the sector has always been the Mercedes Sprinter, but there are a number of other contenders which spring to mind, such as the bigger Ford Transit Custom Sport (due for a major facelift in Spring 2014), Iveco Vans , Peugeot Boxer, Vauxhall Movano and Iveco Daily – and then, at the top, you will find the reliability King, the Volkswagen Crafter.

History of the Volkswagen Crafter

The Volkswagen Crafter was introduced in 2006 and built by Daimler AG,[1].   It is the largest 3 to 5 tonne van produced by Volkswagen and as you’d expect from any product bearing the VW badge, its a reliable, solidly-built workhorse that not only does the job, it keeps on doing it and to quote Dan Tye in Van Trader:

“VW’s largest panel van is ideal to shift large loads over long distances. It does tough jobs but it oozes a quality feeling in the cabin that other large panel vans can only dream of giving.”!

It is the third generation of the Volkswagen LT truck, which has been in production since 1975.   The Crafter officially replaced the 31 year old LT nameplate, although it is known as the LT3 as its production plant code. 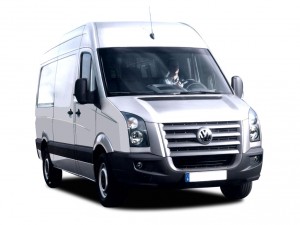 The Crafter is available in Panel Van, Window Van, Chassis Cab and Double Chassis Cab versions, as well as factory fitted dropsides and tippers in the ‘engineered to go range’, which unlike most vehicles in this category are available in stock.  We are able to supply all of these vehicles in a wide range of specifications so if you don’t see the Volkswagen Crafter you want on our website, call us and we will get it for you – and if its not available as a factory fit, we can get it ‘crafted’ for you! 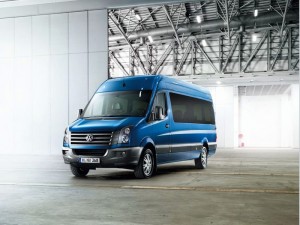 Volkswagen have always been an exemplary supplier to follow in the light commercial vehicle market.  The whole Volkswagen Commercial Vehicles

range has continually proved itself with fleet operators and was named as the most reliable van manufacturer in an annual Fleet News FN50 reliability survey. The Caddy and Transporter models performed well, both being honoured among the top five van models.

The larger Volkswagen Crafter finished a respectable sixth overall – no mean feat given that this was across the whole sector from the tiniest compact van to just short of a truck! 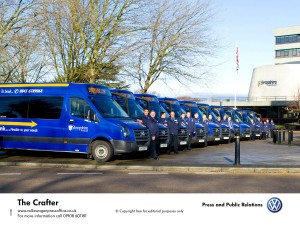 The Volkswagen Crafter is one of those vans that drivers love.  No doubt this has added to their commercial success, being the vehicle of choice for many fleet operators.

“Once we can get people to test drive the Crafter we are confident that they will go for it.”

Whilst Owain Price and everyone at Swiss Vans obviously love the Volkswagen Crafter, we may be a little biased.

So, don’t take our word for it, just look at what the press had to say:

With the big fuel savings and additional payload on offer it is easy to see why sales hopes are rising.  Any fears that the 2.0 litre motor won’t be up to the task of pulling such a large vehicle are unfounded, as in each case the small engine offers improved torque, often at lower revs.

….with stronger, more fuel efficient engines and a classy new front end, the Crafter now looks set to truly rival the best.  Finely-crafted van certainly lives up to its name in every way.   ….the VW engineers are right – even in the smallest 109bhp output, this neat little performer will give plenty of power for most fleet purposes

New 2.0 TDI engines are just as powerful, but more economical and cleaner than previous 2.5

Everything points to a van with greater appeal for fleet customers – more payload, lower fuel consumption and maintenance costs. Combine these with the Crafter’s existing virtues – a comfortable driving position, good handling plus a high level of safety equipment including standard ESP – and it looks more appealing than ever.

VW has pulled it off. Not only has it given the current generation Crafter a welcome facelift, it’s successfully replaced the stalwart 2.5-litre diesels with a range of 2.0-litre state-of-the-art surrogates. Utilisation of the same basic range of engines in all its light commercials is a feat that deserves a round of applause.