Swiss Vans is one of the largest van suppliers in Europe.  We sell great vans from most manufacturers, all of them have their good and  bad points.  With such a large range of light commercial vehicles we don’t have favourites, though we do seem to sell a lot of VW Transporters and Ford Transit custom automatic

Every manufacturer now offers a similar selection of van options these days (e.g. Luton, chassis cab,  panel vans, kombis, 3 lengths, 3 heights) and each manufacturer has its own perceived niche:

Vauxhall vans, Peugeot Vans and Renault Vans are seen as reliable workhorses, Citroen Vans has cornered the ‘value’ market, Iveco Vans is the ‘big jumbo’, and at the Marks and Spencer end of the Market, the ‘high quality, reliable, long lasting and always ultra cool’ Volkswagen Vans wins every time!  However, none of these have led the market for over 40 years.  That honour goes to the humble Ford Transit which has a long history.

Ford Transit History – 10 things you may not know:

Ford Transit history started back in 1965, during 40 years of dominance it has gone through many evolutions, here’s just a few fun things it encountered en route to the history books: 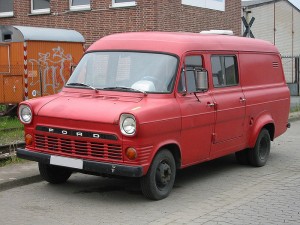 The latest models are a world away from the Ford Transit mark one. If you are looking for a van with a history, you can’t go wrong – maybe the best thing about Ford Transit History is that its still being written and the latest model (shown below) is due to be released in May 2014!

Thanks to Wikipedia for their invaluable help with this article